TAKE CONTROL OF YOUR FENG SHUI

Billionaire come-back-kid entrepreneur Donald Trump has a Feng Shui consultant advise him on all of his building projects. Oprah’s had her feng shui done, too.Legendary fashion designer Liz Claiborne and her business partner husband Art Ortenberg attributed a great deal of their outstanding success in creating an apparel dynasty to their following of the principles of Feng Shui. Most new buildings in Hong Kong ( like the prestigious Bank of China designed by acclaimed architect I.M. Pei) have to be approved by Feng Shui experts before construction begins.

If that doesn’t convince you that Feng Shui is more than a New Age trend, consider this: the architect of our nations presidential residence, The White House, incorporated the western form of Feng Shui known as “geomancy”. Geomancy, like Feng Shui, is a practice of placement to create harmony and balance and allow the optimum flow of energy. 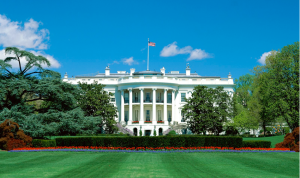 How does Feng Shui fit into today’s working world? Especially how can we apply it if we are merely the worker bees and have no control over the actual hives? We can start by focusing on what we DO have control of: ourselves and our own space. At home AND at work.

Even if you are a mail clerk without an office you still occupy a space within your company. Maybe instead of a desk, you have only a locker. Or a cubby shelf. Or a mailbox. Claim that space! Make sure it is going to help bring better opportunities your way instead of blocking your progress. Keeping your space — whether it be desk or locker — very tidy and clean will improve your work life. Making it pleasing to your eye by adding personal touches is fine, as long as they are appropriate to the work setting you are in. IE: You don’t want a pin-up calendar in your cubby, even if nobody ever sees your locker space.

It’s about being your best and doing your best. It’s about keeping a clear open path for opportunity and abundance to find you no matter where on the corporate ladder you are. It’s about creating room for expansion. Just ask Donald Trump.

WHY PRESIDENT OBAMA NEEDS TO REDECORATE HIS OFFICE NOW! (The feng shui of the country depends on it!)

According to The Washington Post’s Binyamin Appelbaum and Michael A. Fletcher, as of this past Saturday March 27 President Obama “has held himself up as an example, saying that he had not yet renovated the Oval Office and was still using George W. Bush’s furniture, even noting the stains on the carpet. He urged the banks to show comparable “constraint and responsibility,” adding that the nation had undergone a cultural shift.”

As a feng shui consultant, and a Democrat, this makes me very nervous! The residual Qi (energy, pronounced “ch’i”) left behind by 43 and his administrative cronies is still lingering in the Oval Office. Ever hear the term “the air was so thick you could cut it with a knife”? That’s what happens when heavy potentially negative Qi builds up in a space. Eight years of the heaviest vibes—think 9/11, Iraq, Katrina, the worst financial crisis since 1929— have built up in the Oval Office and need to be cleared out so the president can feel at ease and really focus on his job without any negative influence. The air in there is probably so thick, he’d need a machete to cut it. I’m not suggesting there is a magic wand. But letting in some fresh air so he can think clearly without the ghosts of the past administration tainting the atmosphere should be a feng shui priority, and feng shui is a bipartisan issue.

From a visual standpoint alone, the symbolic nature of a stained carpet in the office of the most powerful person on earth does not enhance the image of the presidency. While it’s a laudable intention behind holding back on a spending spree, it really is necessary for the good of the country to freshen up the Oval Office. How to get the good vibes back? President Obama needs to claim this space as his own. And just for the record, an Oval Office facelift doesn’t require a lot of taxpayer’s money:

*Repaint the walls. This is the simplest way to change the feel of the room.

*Replace the carpet. Stains represent blemishes from the previous administration.

*Seat yourself. If you can, replace the entire office suite. If not, start with a fresh chair.

*Choose personal symbols. Bring in art and personal objects that inspire you.

*Clean all fabrics. If the curtains and upholstery is not being replaced, give it a good steam cleaning at the very least.

*Clear the air. Space-clearing with a sage smudge stick has become very mainstream in many of the most successful urban corporate offices from Donald Trump to Donna Karan. If Oprah can’t refer you to someone, give me a call.

And remember, Mr. President: you’re representing We the People. You deserve a clean slate and a decent space to work in. Enhancing your feng shui can’t hurt, it can only help!