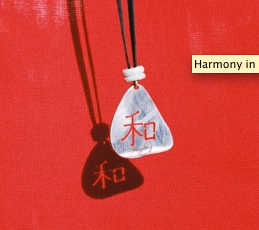 A feng shui necklace by May Pang.

Synchronicity is always at play in my life. I had just finished reading the last interview with John Lennon & Yoko Ono and posted about it on my Feng Shui By Fishgirl blog. Then I was searching online for feng shui jewelry and discovered this line designed by May Pang. In case you are not old enough to remember, May Pang was John Lennon’s companion during his infamous “Lost Weekend” (a weekend that lasted 18 months in LA). I contacted Ms. Pang to find out if this line was currently available so I could feature it here on my blog. She graciously emailed me back to say yes. Each necklace represents a different auspicious feng shui intention such as Harmony, pictured here. The designs are simple, clean, and uncluttered—just like a space should be when feng shui principles are applied to it. 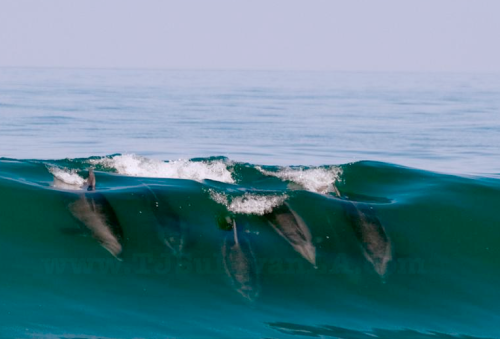 Just like happiness, I believe optimism is a choice. I like to look for signs and the last week of December I saw synchronicity everywhere that 2010 is going to be a much better year than the last. While walking on the beach the day before Christmas, we were just about to leave the beach when out of the corner of my eye I spied a pod of dolphins breaching the waves close to shore only 25 feet away from us. As soon as she had our full attention, one of the dolphins broke from the pack and actually surfed the wave. It was breathtaking and I had never seen a dolphin surfer before. I didn’t capture it on film, but I did find several photos online of similar dolphins at play so it seems that this phenomenon is not as unusual as it is rare to witness it. Felt like a personal message as I belong to Dr. Connie Kaplan’s online dream circle known as “Dolphin Dreamers”. I’ll be posting more about Connie’s work here at Feng Shui By Fishgirl in the coming weeks. 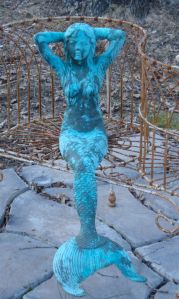 Wandering around Wilmington, NC we went into antique shops. There was a gorgeous seated mermaid statue made of metal with a beautiful green patina. I admired it only to find out later that my bf had gone back to purchase her for me. What a great gift! Is it only a gift? I think it was synchronicity to find such a bold an beautiful embodiment of a fishgirl to remind me of my practice. 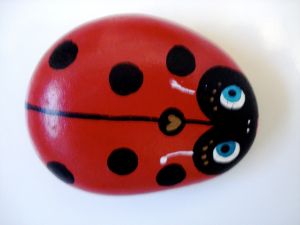 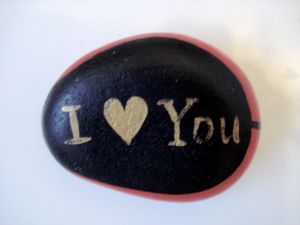 Meanwhile, another walk on the beach…I noticed our dog Loolie deliberately carrying her Frisbee over to something in the sand and dropping it there. I walked over to see what she’d found. Much to my delight, it was a rock. But not just any rock. Someone had painted this rock so that it looked like a ladybug. On the belly of the bug-rock the artist had painted “I Love You”. Call me sentimental but I could swear my dog knew she had found a way to express her love for me. Or even better, the love of the universe found it’s way to me through Loolie. A very good sign and a reminder that we are all connected.

On the last day of our trip, we discovered a pond of beautiful golden koi fish…a most auspicious symbol in feng shui terms. 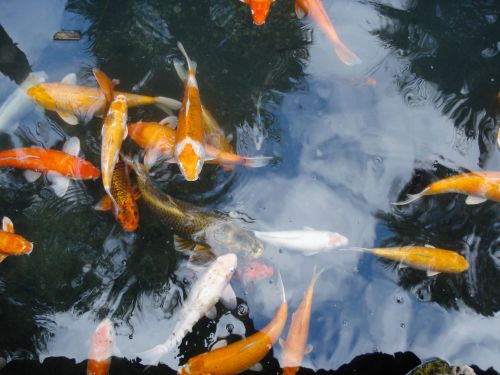 Once you become accustomed to looking for good omens and acknowledging the ones you see, you’ll soon be in synchronicity with the personal messages that the universe wants you to notice. Pay attention (and let us know what signs you’ve been receiving by posting in our comments sections below).

I saw a tiny turtle the size of a ladybug or maybe even smaller. As soon as I noticed it, the turtle started growing. Before long it was recognizable as a loggerhead turtle about the size of a computer mouse. I put it in a fishbowl and was going to get water when my dog Loolie came in and got curious about what I was doing. I picked up the bowl so Loolie couldn’t get at the turtle. I saw the turtle was still growing and already the bowl was too small.
###

Hmmmm……I LOVE how dreams often come true in this fashion. The beach we happened to be on when Loolie found the ladybug(rock) in real life was a beach used by turtles for mating. And, the large dreaming group I belong to that is growing and growing is known as Turtle Dreamers (Dolphin Dreamers is a group within the group).