Now THIS is a cool outdoor bathroom. No, it’s not Hef’s grotto. It’s from FaeMagazine. We’ve got a couple of outdoor bathtubs with hot and cold running water but what I love about this particular one is the stone surround and the plants. Next summer I’m going to have to do more landscaping, methinks.

Check out this new “Omni” trivet designed by Louis A. Lara. He’s attempting to fund the project via kickstarter.com and you can pre-order yours and support this direct design idea if you agree it’s cool! I like the starfish quality of it and the sustainability. I only learned this summer that silicone products can withstand heat. They feel rubbery so that surprised me, too.

Tagged as Louis A Lara Design 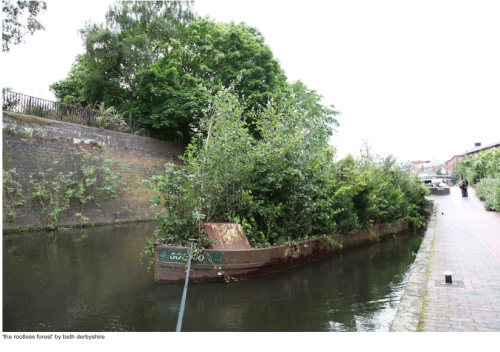 This art piece by Beth Derbyshire may or may not float your boat. She calls it the rootless forest and essentially it’s a reclaimed barge filled with trees that travels up and down a canal. We once had a turtle living in our canoe. And here in Maine you’ll often see creative people turning all sorts of things into planters (old ski boots, toilets, woodstoves, to name a few). Is it art? Is it fun? Is it fun shui? 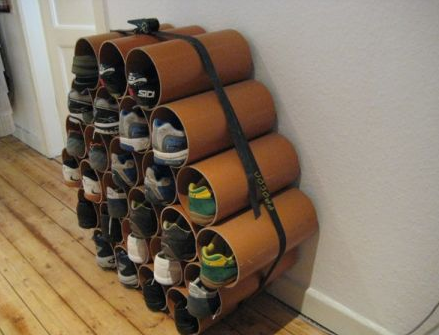 Keeping your space clutter free and organized is the best thing for your feng shui. This DIY shoe rack from iNewIdea is attractive enough to keep outside of your closet. Get complete directions here.

FALSE ADVERTISING CAN BE FUN SHUI! 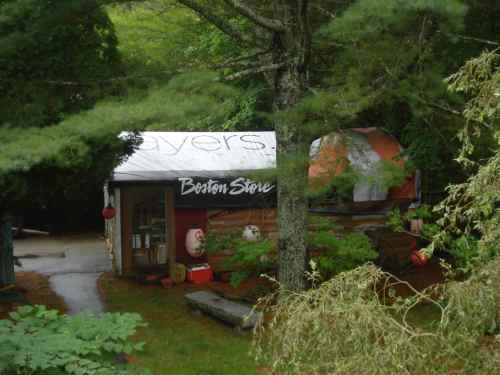 In need of a new roof? If you’re in Maine and you have a funky studio gallery that isn’t worth replacing the roof, you might want to consider used billboard tarps like the one shown here on the Art By Katy studio. My boyfriend converted this antique garage space into a studio for me (see the transformation here). At the time the roof was old and had trees, grass, and moss growing out of it. We told the contractor not to touch the roof and that means please don’t pull out the plants! Well of course he pulled ’em out. So a previously dry interior became plagued by leaks. We solved that by putting a regular tarp over the roof. This worked for a couple of years but we had to replace the tarp every year at a cost of $50. No biggie. However, this summer when we came up to Maine the new tarp hadn’t done the job. I think it’s because of the absence of a thick layer of snow this mild winter we had. So I had to find a new solution. My brother suggested the billboard tarps. They are industrial strength with the capacity to last 5 times longer (maybe up to 7 or 8 years). But the best thing about them is they have cccccccraaaaazy advertising on one side since they were used as actual billboards and then reclaimed to be recycled for other purposes. Some people use them to cover bales of hay. Others for covering boats. We are using them to turn our spaces into art pieces. BTW, you don’t get to choose your advertising tarp so what you get is random and a complete surprise. I’d say this tarp had my name on it but it says “Boston Store” and has a huge face of a woman in a hand knit sweater that you can only see from an aerial view. I thought that was so cool since I used to have a career designing sweaters. 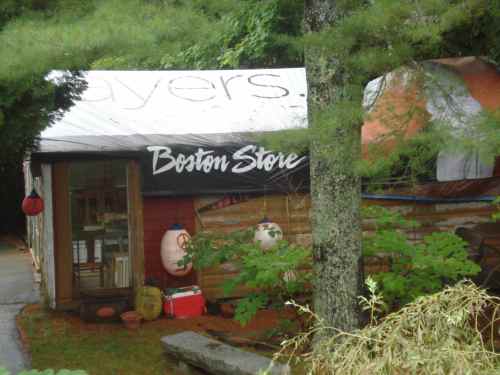 Coincidentally we also had a vintage Airstream trailer that began to leak after we gutted the interior to create an open space with plywood inside. We looked at all kinds of solutions and decided to try a tarp on it, too. It’s a quick, easy, cheap solution and in this economy that is cool with us. The Airstream billboard tarp says “Cuddleduds” on it. We like the bold graphics, the ease of cutting them to size, and also that these are repurposed and recycled products that are helping with environmental concerns.

The company that sold them  (at a cost of not much more than a regular tarp) says you’re supposed to use them with the solid side up. Don’t tell on me. 🙂

MAKE YOUR OWN ART CHAIRS 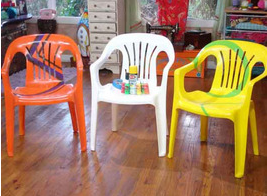 I wish I had a larger photo of these cool rejuvenated resin chairs but I don’t. Directions on how to paint your own at DIY, your source for Do It Yourself Projects with complete instructions so you won’t f*ck it up.

Are you a groundhog? You may want to be after seeing some of these fabulous underground homes! The amorphous structure seen here is in Switzerland and recyclebank has more to show you on this and other deluxe dirt dens. Underground dwellings can be very beautiful as well as energy efficient. I’ve never feng shui’ed one so I can’t report on the feeling of the ch’i. As long as it is well designed, well lit, visually beautiful, comfortable, and not cold and clammy I can’t see any downside feng shui wise. Can you? 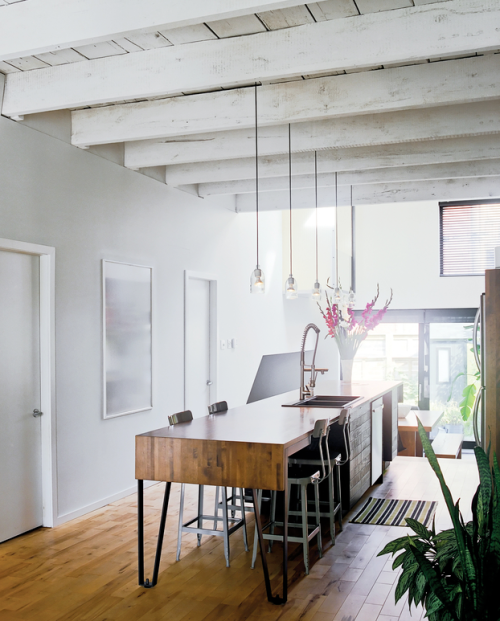 A beautiful renovation from Dwell Magazine wherein a lot of the wood was reclaimed to make tables and counters as shown here. What I liked about this photo is it shows a classic beam cure. Wooden beams are considered heavy and oppressive in feng shui terms. However, whitewashing them as has been done here softens that effect. Theoretically the white color represents metal and metal cuts wood, thereby breaking the oppressive ch’i energy from weighing down on you as you sit below them. Beams in a room like a kitchen are not as big a problem as when they are over a bed. Imagine this kitchen without the white painted ceiling and beams…can you see how the room would be imbalanced by too much wood then? So even if you don’t believe in feng shui you can see how it is just good common design sense to balance the visuals–all wood is no good. Regarding the snake plant with the pointy tips…if it’s in your Fame area of the bagua then it’s okay. Anywhere else, you’re better off with rounded leaves on your house plants.

Color plays an important role in the practice of feng shui. Read on to see how the right hue can maximize your career prospects.CAREER: Black is the color of the Career sector of the bagua map. Black represents water, which is the natural element associated with career. Wearing black or having black furniture and accessories in your office makes a strong statement that you are serious about your career. Touches of black are enough — anything in excess represents an imbalance. Feng shui is about achieving perfect balance in all areas of your life.

WISDOM & KNOWLEDGE: Green and black and midnight blue are smart choices. If you’re studying for a test, consider wearing one or all of these colors until you’ve passed the exam. Or consider using these colors in your library or office, especially if you are in the professions of law, teaching, clergy or dispensing knowledge of any kind. 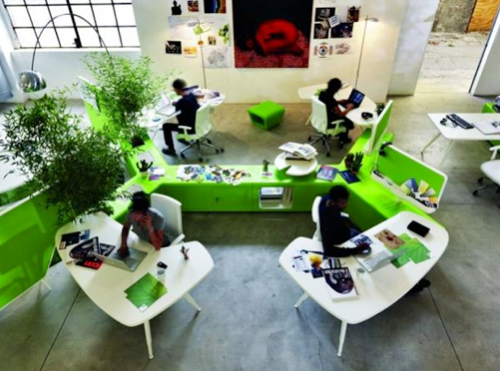 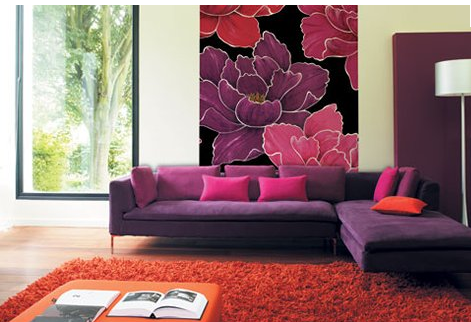 FAME & REPUTATION: Red matches the element of fire, which is the activator for fame. Just watch political candidates — even Democrats will wear a red power tie. Wearing red under clothes is also effective.

LOVE & RELATIONSHIP: Red and shades of pink, peach and white are all conducive to romance and the strengthening of relationships.

CREATIVITY & FUTURE PROJECTS: White is what works here. Perhaps because it represents a clean slate, an empty canvas, a clear mind? White is also equal to the element of metal, which rules this area of the feng shui map. Rooms where creative types meet and work on new concepts ideally should be pristine white.

TRAVEL & HELPFUL PEOPLE: Grey or black or white used singly or together will enhance this area. Silver and other metals also work. Consider framing travel photos in these colors or try wearing a gray flannel suit when you’re meeting with your investors.

I’m stunned that this beach exists in California and I lived there for 16 years without ever hearing about it. A beach made of polished glass instead of sand! Well, technically glass is made out of sand. Check out the full post and lots more pictures here at the Unfinished Man blog. 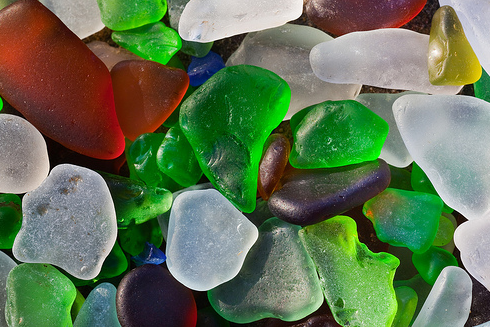