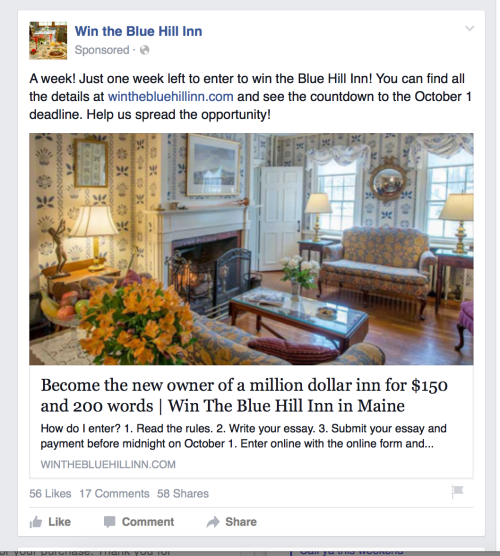 You still have time to enter to win the Blue Hill Inn. Entry fee is $150 and 200 word essay must be yours and yours alone. Check out details on this opportunity to be the new owner of this historic B & B: http://winthebluehillinn.com

I have personally seen this inn and can attest to the feng shui being lovely and positive. Downeast Maine without the kitsch– upscale, charming, and a great place to stay. Why not test your luck?

SONGS FOR JAPAN: 38 Tracks to Benefit the Earthquake-Tsunami Survivors 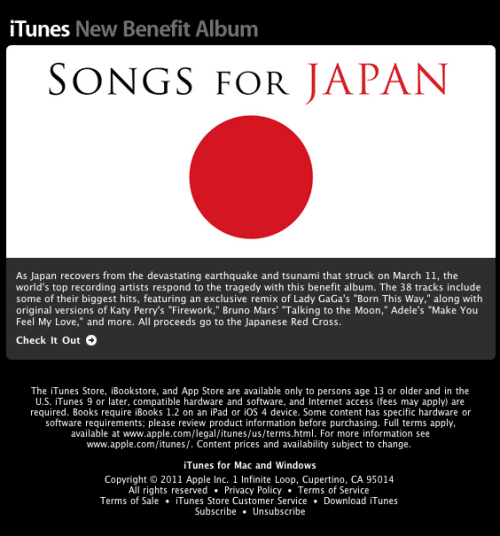 Click on the photo to jump to the iTunes link.

The aftermath of the 2011 Sendai, Japan Earthquake & Tsunami (AP photo)

A compilation of  relief orgs you can make donations to benefit Japan from Huffington Post:

Take the poll and let Feng Shui By Fishgirl know if you’re interested in the $99 feng shui office energizer consultation by mail. Free Love Power Heart signed print for everyone who books their office consultation during the month of February 2011. Consultation includes a review of your own personal office space or cubicle (ie: not the entire floor of an office building) to locate the Command Position and give you solutions for improving your work feng shui.

Contact fishgirl@earthlink.net for your by-mail Office Energizer Consultation. Include your phone number, mailing address, diagram sketch of your office space with your deck and other furniture details drawn in, entry door, etc  (see this post for example of how to hand sketch your layout of your floorplan) and any photos and descriptions of your wall color, flooring material etc. We will get back to you within 3-4 weeks to confirm your consultation details and arrange for your payment via PayPal. You’ll receive your written report and your FREE Love Power Heart print soon after!

Looking for a worthy charity to donate to this holiday season? Check out Dog Tags For Kids, a program designed to help put smiles on the faces of the kids of our troops overseas. It’s a wonderfully creative program and the website has other great links where you can email troops messages for the holidays, etc. Support our troops (they didn’t create the policy)! 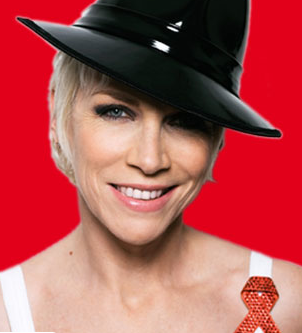 Just finished watching the 25th Anniversary Rock & Roll Hall of Fame show on HBO and was intrigued to see Annie Lennox wearing a t-shirt that said “HIV POSITIVE”. Turns out the singer has created a charity foundation to raise awareness of AIDS and does not have the virus herself. Check out her website. Donating to good causes is good feng shui.

BTW, if you saw the Rock & Roll show, what did you think? I thought it was brilliant how they took what could have been a boring show of old dinosaurs and brought in surprise artists to sing with other bands (like Ray Davie of the Kinks singing with Metallica!). Rock on!

Ken Marquis, founder of the Landfill Art Project sent me an invitation to participate in his artist reclamation venture. I accepted and a few days later a box arrived with a sandblasted hubcap in it. It was a challenge to apply my mixed media maps and acrylics to this slick surface. The project is going to raise both awareness and funds for reforestation through a traveling exhibition and book. I don’t know if my work will be one of the 200 international artists’ work chosen for these, but it was definitely a fun and worthy cause.

“Marni” was the winner of the Feng Shui Bedroom Makeover that was my giveaway prize at the Ultimate Blog Party. Posted here is my partial analysis of Marni’s bedroom’s feng shui. The idea was to offer simple solutions that won’t cost a lot or take much time to achieve but would add a great deal of feng shui impact to enhance the Qi (energy) and strengthen the love area. For example, what could Marni do that doesn’t require repainting the entire room? Removing clutter and organizing her space was the first step I encouraged Marni to make.

Marni’s still working on implementing my suggestions and will get back to me with more photos at some point. The above bagua map overlay shows that Marni’s bedroom was already fortuitously located in the Love & Marriage area of her home. The Love & Marriage sector is naturally enhanced by the colors white, red, pink, and peachy tones. Marni’s room is already a deep lime green color. However, she can inexpensively bring in accent tones of pink/red that are already found in the fabric of her bedding and curtain valance.

The artwork in Marni’s bedroom was placed much too high. I also discovered that Marni did not LOVE the art. It’s always a good feng shui idea to remove things that you absolutely do not LOVE (especially from important areas like your Love & Marriage area/ master bedroom). Until she can afford to replace it, I suggest she lower the paintings. Replacements that would enhance the romance in feng shui terms would include pictures of happy couples, mated animals, roses or peonies, or hearts. I wouldn’t be surprised if Marni ends up liking her tropical paintings more if she rehangs them and then adds the other touches I offered.

I would also like to see Marni replace the bedside lamps with two matching lamps that have substantial round bases. The candlestick lamps are too spindly, too matchy-matchy to the wooden bed, and add too much yang to an already very masculine feeling room. Globe shaped ceramic lamps will bring in feminine energy and can also bring in the love enhancing color accents to offset the lime green walls.

The sliding doors were covered with a skimpy valance that did not make a lot of sense. Since the doors are also aligned with another pair of French doors (unseen in the photo), it’s creating a “Poison Arrow”. My solution is to add some soft, puddled curtains swagged to each side and then released at night. I suggest a gauzey white fabric or something that brings in the romantic accent colors discussed above.
A large potted palm with rounded leaves would also be nice to the left of the slider, capturing the palm tree theme in the art and the bedding as well as disarming the Poison Arrow effect.

BTW, a Poison Arrow is when you have two or more doors or windows in direct alignment. The energy is said to whoosh straight through instead of meandering gently around a space. 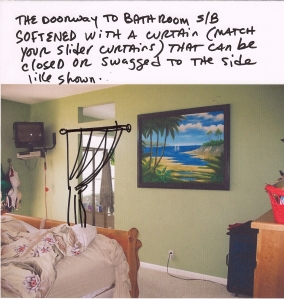 The bathroom entry is viewed from the bed. Not too sexy. I want Marni to swag a curtain (same fabric as she’ll use on the sliding doors) and drop it down at night so the bathroom is hidden. Again, this will add yin energy to the harsh architectural cut of the doorway as well as add visual appeal.

Marni received my full analysis which included some other tips.
Do you think these simple suggestions will be enough to give the room a much more romantic energy?

Marni has won the Feng Shui By Fishgirl Master Bedroom Makeover Advice to Enhance Romance mini-consultation that was part of the Ultimate Blog Party 2009. Thanks to all of the 81 people who entered the drawing. I will be publishing Marni’s bedroom photos and my suggestions for enhancing her feng shui in a future post so please subscribe to the blog or keep checking back.

GIVEAWAY WINNER to be announced Monday

The lucky winner for the Ultimate Blog Party 2009 Giveaway will be posted on Monday! Check back to see who won the Feng Shui By Fishgirl Master Bedroom Makeover Advice to Enhance Romance Giveaway consultation.