Do you want the easy effortless style of Diane Keaton, age 69? Here she is in AARP Magazine looking vibrant and young at heart. I couldn’t help but noticing her giant sterling silver cross. I have one for sale on my Etsy shop!  So if you like this look, click here and it can be yours.  And your search for a 2016 fashion muse can be ‘crossed’ off your list.

FENG SHUI FOR THE DOGS… 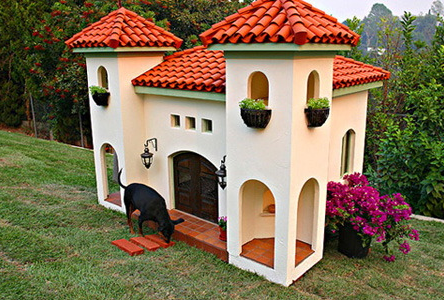 There’s a really comprehensive post about fancy dog houses over at dogster.com. Click the link and you’ll see more photos of supermodel Rachel Hunter’s dog houses (shown here) as well as Paris Hilton’s supposedly $325K doggie digs. Having pets is wonderful for your feng shui. Making them live apart from you in an outside house–no matter how nice–is not so great for either of you. If you want to benefit from the loving relationship that a dog can give you, treat them as you would any member of the family.

I’m so excited to find a new design blog to add to my repertoire. Habitually Chic posts about all kinds of cool design stuff. Check out their post on travelin’ in style. They’ve even uncovered a pic of Led Zep in front of their airplane for this great pictorial.

The symmetry of this poolside cabana designed by Jamie Durie creates good feng shui balance. I’m a sucker for turquoise color–it’s so soothing and instantly puts me in the mood for relaxation. There are a couple of design elements here that are off kilter—the two lamps are mismatched and either side of the structure has a different potted plant arrangement. This slight assymmetry gives an extra boost of energy to the overall space and does not harm the balance at all. See more from this designer at Elle Decor. 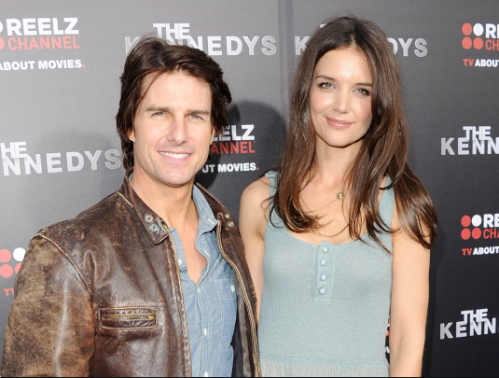 I want to feng shui Katie Holmes’ new apartment in NYC. If I were hired, I would strengthen her tai ch’i core in order to support her new found independence from Tom Cruise. I’d also make sure her creative desires were represented in her home. It’s been reported that he had a Svengali-like hold on her and would not allow her to take on movie roles he didn’t approve of, monitored her cell phones and email, and had other controlling tendencies.

My guess is Katie might not be open to feng shui because she might misconstrue it to be a religion or Scientology substitute. It’s neither of those things. Feng Shui is an ancient Chinese art of placement and energy flow to align one’s architecture and environment. Wishing Katie good luck in her next chapter of her life. And I wish the same for Tom, too. Call me if you want some help with your feng shui!

STILL MAKIN’ IT RIGHT IN NOLA

We first covered Brad Pitt’s “Make it Right NOLA” back in November, 2009 with this post. It’s three years later and Brad’s non profit org has made inroads into rebuilding New Orlean’s lower 9th ward —hit hardest by Hurricane Katrina—one house at a time. Using sustainable construction and known architects, the affordable housing is making waves in the design world. Here are just three of the completed houses. Go to Make it Right NOLA to see more and find out how you can contribute to this worthy cause (which also contributes to your own excellent feng shui). Oh, and there’s a great video of Mr. Pitt there, too.

Wander down Wall Street and you’re sure to see some powerful women wearing their Christian Laboutin status symbol shoes. You’ll recognize them from the Chinese red soles–red being a very powerful feng shui color symbolizing wealth. I’m sure now that you know about them, you’ll notice this signature sole shoe appearing in TV and film on movie stars as well. Which reminds me…I saw a film on TV the other day where a character was using bright red nail polish to paint the soles of her shoes red to mimic this look on the cheap! It was hilarious. Not sure if it works or not. Someone please try it and let me know! I don’t have a need for heels as I am on an island in Maine where LL Bean is the fashion king. Ayup.

From time to time Feng Shui By Fishgirl gets behind worthy causes and lets you readers know about them. It’s good for your feng shui to contribute support to charities, causes, and to do good deeds. My friends Joe Gantz and his wife author Corine Gantz introduced me to my life partner. Now THAT was a good deed, indeed! So I want to tell you about Joe’s latest project and how you can  help.
AMERICAN WINTER is a documentary feature film that shines a light on the dramatic personal stories behind the country’s worst economic crisis since the Great Depression. Produced and directed by Joe & Harry Gantz (creators of HBO’s Taxicab Confessions & executive producers of the CBS series The Defenders), AMERICAN WINTER is a powerful documentary film about families struggling to keep their heads above water right here and right now. To make this film, they partnered with the nonprofit organization 211info in Portland and were given full access to monitor and record calls from distressed families calling 211’s emergency hotline in search of help.

Then the filmmakers began following the stories of some of these callers in more depth over several months. The film follows several families as they struggle to get by while facing overwhelming challenges and dwindling resources available to help them, creating a powerful firsthand view of Americans caught in today’s financial undertow. The goal is to complete American Winter and release it before the 2012 American elections so that both the public and legislators making choices about who will be taxed more or less, and whose services should be cut or preserved, can take into consideration the overwhelming challenges facing so many families today.
Wanna help get this film off the ground? The filmmakers are in the process of finishing the film but some funding is still needed. Check out indiegogo crowdsourcing to donate whatever you can to the American Winter film project.

BARK IF YOU LOVE…

Feng Shui By Fishgirl felt like barkin’ up the wrong tree today. So here are my takes on bark. If you’re feeling your sweet tooth go for the best chocolate bark in Cleveland: Lilly Tremont makes this and gorgeous truffles, too. Great gift for any mom on your list as well as for any occasion–you can’t go wrong with chocolate!

Another kind of bark is what my dog Hershey (yes, he’s named after the famous chocolate bar but he’s a white chocolate variety) has elevated to the level of song. Check out the video of Hershey Dawg Singing on YouTube and please Like him on facebook, too. Note to self: keep dogs away from chocolate because it is dangerous for their health. It’s also dangerous for my thighs but that is another story…

I designed a collection of Tibetan rugs hand made in Nepal inspired by the woods of Maine. The one shown here was called “Bark”. This fall I’ll be introducing a new line of rugs inspired by watercolor paintings.

And finally, what’s Ellen Barkin doin’ lately? Anybody know? I’ll bet this cougar is kickin’ back with a 20 something hottie and some of that Lilly Tremont chocolate bark and a bottle of wine right now! Bark if you love anything about this post…woof!

Caine Monroy is an engineer, designer, creative genius, positive role model, optimist, visionary, dreamer and hardworking entrepreneur. Caine Monroy is also 9 years old. He is the inventor of Caine’s Arcade in East LA. Thanks to the short film about Caine made by Nirvan Mullick we can all share a smile and become inspired by Caine’s story. I don’t want to spoil it for you. Just go to this link to watch the 9 minute film.  This kid is well on his way to being the next Steve Jobs or Leonardo da Vinci. Feng Shui By Fishgirl suggests you also make a donation—even $1 is okay— to Caine’s scholarship fund to give your own feng shui a boost! This is one charitable donation that you can actually feel you you are making a difference in someone’s life directly.