WHEN *NOT* TO LET GO: Tenacity & Customer Satisfaction 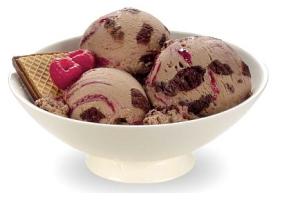 Are you the kind of person who doesn’t followup when something you’ve paid for turns out to be unusable? Let me give you an example. I bought a pint of Haagen-Dazs ice cream from my grocery store awhile ago and when we opened it to eat it, there was a chalky weird texture to it. The question is whether to throw it out and forget about the money spent, or, to report it to either the manufacturer or the grocery store (or both)? If you take a moment to report it you’ll be rewarded with a refund or replacement from most grocery stores and if you call Haagen-Dazs to report it, they’ll give you a coupon for a replacement. If you do nothing, you are sending a message to the universe that you don’t value money (so why should the universe send any more to you?). In addition, by calling attention to the problem, you are helping to be part of a solution and getting closure on it. This is good for your karma and good for your feng shui. I have helped friends who had nightmare airplane flights write letters to the airlines and subsequently they were given coupons for free upgrades and one time even a free international flight. The burden of proof is on the complainant, but if you feel you have enough proof and you take the time to present your case well, you will be rewarded.

Another time we were at the movies. There was still a half hour left of the film when a theatre employee pushed a noisy trash can down the aisle. We stayed to watch but our concentration was broken. I would have walked away, dissatisfied but thinking it was no big deal. My friend went to the manager to complain. Guess what we got? Two complimentary passes to another show.

Then we ordered an expensive high end ping pong table that arrived scratched up. We felt we deserved an unscratched pristine surface so we emailed photos of the damaged table. The manufacturer sent us a new table top without requiring us to send back the damaged one. Hmmm…now we have two ping pong tables for the price of one. Setting the record straight can often bring you bigger benefits than you were even expecting. And that is abundance at work.

Do you have any stories of consumer satisfaction to tell? Do you walk away from money or followup with complaints? Do tell!

Tagged as complaining about products or just forget about it?, customer satisfaction, Feng Shui, Wealth & Abundance

FANCY PAINTED WALLS: Back in Style? 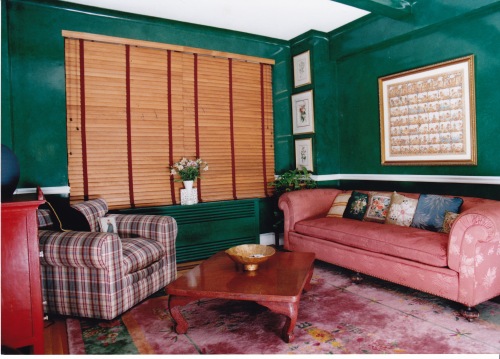 I’ve been told fancy gemstone painted walls are making a comeback. In 1987 I bought a NYC co-op apartment in an Art Deco landmark building. The building is off Gramercy Park and was used as a backdrop in the Miami Vice television series (now I’m really dating myself!).
Anyway, the living room is pictured here. There is a catty-cornered fireplace that is not in view and I haven’t been able to locate my photo album. But check out the malachite stone green faux painted walls (and beams!) in a high gloss lacquer finish. Even the heater cover was faux painted so that it would disappear into the wall.The chair rail molding and ceiling were painted chalk matte white.

The Art Nouveau rug is a vintage mint condition Chinese Nichols brand rug that I still own (it’s for sale if you like it contact me). The sofa–silk brocade and stuffed with down–was bought at auction along with the rug from the original 1920’s owners. The embroidered pillows were from my many trips to Hong Kong, the botanical prints from a shop in Paris, the large gilt framed piece is a Balinese wax resist calendar purchased in Bali. The coffee table is a pre-war Japanese balsa wood table (it’s very lightweight) with a rice lacquer finish in red. Rice lacquer lets mother-of-pearl layers under the lacquer sparkle through to the top. It’s very unique and I haven’t found any like it since although friends in Japan say they’ve seen them in black lacquer. The arm chair was by Ralph Lauren and I basically bought it to try to match the scale and curves of the antique couch. The blinds are custom cherry wood with burgundy grosgrain tape and the burgundy chest to the left is a Balinese altar cabinet from ABC Carpet.

When I listed the property for sale in 1992, the realtors convinced me that the walls needed to be painted beige. I reluctantly allowed that to happen and eventually the apartment sold.